Took a drive through Starved Rock State Park yesterday to look for bald eagles. Only saw a few here and there along the Illinois river. Some were flying, some were perched in the bare trees over the water. This one, a juvenile, was sitting in the snow picking at what might have been a fish.

Did you know it takes five years before a bald eagle gets it’s white plumage?

Like Loading...
Many years of the Illinois River overflowing it’s banks has exposed the root structure of this
Silver maple, yet it still lives.

Doesn’t it look like it’s about to walk away?

It was a nice day for a walk today, a little chilly, but nice, so we got out an enjoyed it.

It snowed two days ago actually. This was the first time I could get out with the camera.
I must admit, I wasn’t thrilled when it started snowing because I was at work had to drive home in the middle of the storm. I am a transplanted Illinoisan and driving on snow and ice doesn’t excite me, but now that the roads are cleared and the sun is shining again, it really is very beautiful.

I love the way the light sparkles in the snow in the late afternoon sun, as in these pictures here. And the way the long blue shadows reach across the snow is very inspiring.

Yes, I guess you could say I do love the snow, from an artist’s perspective that is….

Like Loading...
Today was a beautiful day for a walk along the
Illinois River in Starved Rock State Park….

Like Loading...
I was taking pictures yesterday and saw this tiny little spider and her web in my Nine Bark.

If you look closely, she’s invited three gnats for dinner!
I
I
…and my Peony finally bloomed!
another one I planted years ago
and forgot the variety name of,
Sigh……

It has a really sweet scent!
I

Like Loading...
We’ve had a lot of rain to go along with
our long, cool spring and once again,
our rivers are rising!
( We got another 2 inches of rain right after these shots! )

the Skunk Cabbage here~  Symplocarpus foetidus, is a rather foul smelling plant that love wet areas.

And the final sign that Spring has arrived in Starved Rock….. 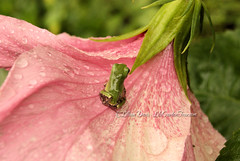